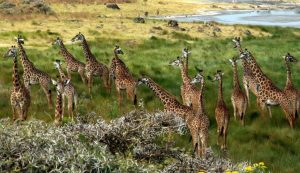 The park is known for having a variety of wildlife; however, tourists shouldn’t expect the same amazing game-watching experience as in other national parks in Tanzania like Serengeti National Park or Ngorongoro Crater. In spite of the small size of the Arusha National Park, common animals like giraffe, zebra, cape buffalo, warthog, black and white colobus monkey, the blue monkey, elephant, flamingo, bushbuck, and many other animals. You will be able to find leopards in the park though it’s rare.

The park is most perfect for tourists with less time in Arusha for example in case you have like a day in Arusha or Moshi and need a sample of what Tanzania has to offer, look no farther than Arusha National Park which is found in a 1-hour drive.

While it can’t match the stunning greatness of Tanzania’s more famous safari destinations, Arusha National Park can’t be bested with regard to proximity and easy access. This small 552 square-kilometer park is only an hour’s drive from the safari center of Arusha, and a one-day safari to Arusha National Park is very possible.

Arusha National Park is among the few parks in Tanzania from where you can enjoy a walking safari in addition to a game drive, kayaking, and many others. In case you have a few days in the park, you can also enjoy the climb to the amazing Mount Meru which overlook the park
Africa’s well-known big cats aren’t bountiful here, but it will not give you hard time to spot other wildlife in the park. The park to a variety of wildlife including zebras, elephants, waterbucks, cape buffalo, colobus monkeys, baboons, a variety of antelope, and some of the world’s biggest populaces of giraffes.

It’s likewise an excellent birding destination, with splendid flocks of pink flamingos covering the Momella Lakes and over 400 bird species can be spotted in the park.

Arusha National Park offers a brief look at the whole of Tanzania in a manageable size. You’ll see a variety of animals grazing in the open meadow known as “Little Serengeti.” There are herds of buffalo meandering through Ngurdoto Crater, or “Little Ngorongoro.” And don’t miss the great assortment of monkeys and birds in the trees of Ngurdoto Forest.

A safari to this small, however impressive park is a perfect way to start your safari in Tanzania and also experience Tanzania’s bountiful wildlife, regardless of whether you have the opportunity (or funds) to focus on a more extended safari.

What to do in Arusha National Park