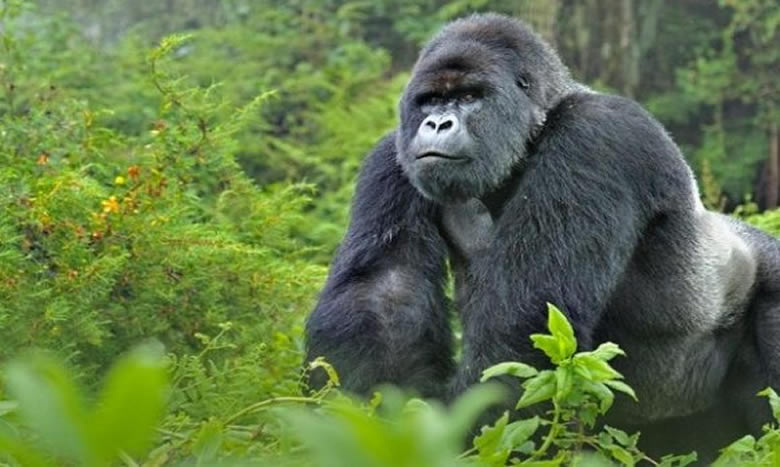 The Democratic Republic of the Congo (DRC) is the largest and the most populous nation in Central Africa. Lying astride the Equator, the D.R. Congo is remarkably a unique gorilla safari destination in Africa. All the two sub-species of Eastern gorilla- Mountain gorillas and Eastern Lowland gorillas call the D.R. Congo a home making it a unique destination of its own.

Congo gorilla safaris and tours introduce tourists to the country’s 2 distinct destinations to enjoy gorilla trekking. Gorilla trekking in Congo is done in Virunga National Park and Kahuzi-Biega National Park, each park offering you a great opportunity to encounter a group of distinct gorillas.

In the Virunga National Park Congo, tourists get a chance to embark on a gorilla trekking adventure to see the endangered mountain gorillas in the wild. The UNESCO World Heritage Site lies in the Eastern side of D.R. Congo and forms part of the Virunga Conservation Area (VCA).

Mountain gorillas are without doubt Virunga National Park’s prime attractions and there are 8 habituated gorilla families already open for gorilla trekking. Virunga was designated a UNESCO Site in 1979 due to its ecological significance. Virunga National Park is an amazing destination to explore impressive species of wildlife including 22 primate species, 65 species of amphibians, 706 species of birds, 109 reptiles.

Besides mountain gorilla trekking, Virunga National Park offers other most exciting activities for tourists to engage in. They include chimpanzee habituation, guided nature walks, Nyiragongo hiking, birding, and others. The birds of interest at Virunga National Park include narrow-tailed starling, Madagascar bee-eaters, Ruwenzori turaco, grey throated barbet, fish eagles, and others.

There are different accommodation alternatives for everyone on safari in Virunga National Park to spend a night. They range from budget, mid-range to luxury options with the most popular lodges including Kibumba Tented Camp, Mikeno Lodge, Tchegera Island Camp, Lulimbi Tented Camp, Bukima Tented Camp.

Kahuzi-Biega National Park is set in the Eastern part of D.R. Congo just nearer to Bukavu Town along the Western bank of the Lake Kivu and Rwanda border. This Congo safari park was established in 1970 and derives its name from 2 dormant volcanoes of Mount Kahuzi that rises up to 3308m and Mount Biega 2790m. Kahuzi-Biega National Park sits on an extensive 6000sq.kms of land area and it is remarkably one place where Eastern Lowland gorilla trekking is done.

Main activities to do in Kahuzi-Biega National Park

Kahuzi-Biega National Park is home to 450 species of birds making it a special birding destination of its own. The birds of interest for birders on Congo safaris include the Grauer’s broadbill, yellow-crested helmet shrike, African broadbill, Rwenzori turacos, and others.

Other than unique gorilla species, Congo is also known for its distinct weather and climatic conditions. It is situated astride the Equator, experiencing the most favorable conditions that make it an all-year-round travel destination. There are 2 rainy seasons and 2 drier seasons that D.R. Congo enjoys- the dry season starting from June, July, August to September, and December, January to February.