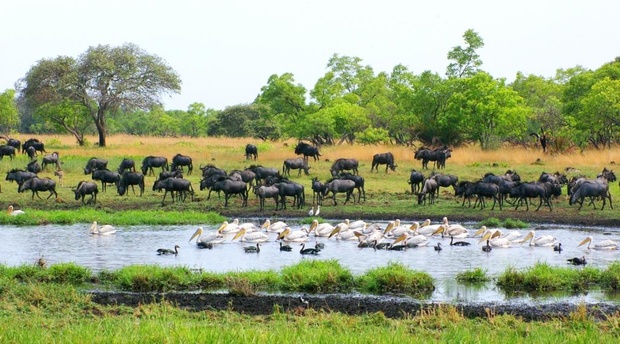 If you are used to encountering wildlife species within thronged Protected Areas, that is not what you will experience within the National Parks in Zambia. This country has many beautiful places that are still unexplored hence making them to maintain their original appearances as they were years back.

Situated at the heart of western Zambia is the country’s oldest and largest Park gazetted in the 1950s and extending for 22,400 square kilometers (8600 square miles-almost the same size as Massachusetts or Wales) over three Provinces including the southern, north-western and Central Provinces. With such an enormous size, Kafue is the second largest National Park in Africa and was named after River Kafue. Regardless of its size, it is one of the easily accessible Conservation Areas in the country-about two hours’ drive from Livingstone but still remain one of the less-known and generally unexplored places with extensive areas of its virgin bushlands still untouched.

Kafue became a Protected Area in 1924 after the British Colonial Government moved the traditional owners of the area-Nkoyo people of Mwene Kabulwebulwe from their ancestral hunting grounds into Mumbwa District in the East and was awarded the National Park status in 1950 by the legendary Norman Carr (19th July 1912-1st April 1997), a British Conservationist working within Southern and Central Africa.

The largest part of the Park lies in the Central Zambezian Miombo woodlands ecosystems characterized by savannah grasslands dotted with Miombo tree species growing densely in some areas and few small dambos (grasslands which become marshy in the rainy season) scattered among them. Due to its large size, the wide range of habitats/ecosystems and the fact that it is not frequently visited like National Parks in other countries, the National Park holds an overwhelming diversity of wildlife species which you will never experience in other places. The Zambezian flooded grasslands including the Busanga swamp and plains support herds of herbivores and their predators.

This National Park has an overwhelming range of antelope species including large herds of Puku and red lechwe as well as smaller herds of blue wildebeests and zebras within the Busanga Plains around the months of June to September when it is a dry season. Across the northern part of the National Park is a wide range of mixed bushland ecosystem where Defassa waterbucks, kudus, duikers, elands, Grysbok, bushbucks, elands and bushbucks are frequently spotted within the Kafue National Park.

Also prides of lions and leopards are wide spread all over the National Park, especially in the forested areas. Although not frequently seen within the open plains, the park is also a home to the cheetahs, spotted hyenas and Cape wild dogs and the Park is one of Zambia’s best strongholds for these animals. River Kafue and its tributaries are generally a hive of activities and home to schools/pods of Hippos and some of the largest Crocodiles within Southern Africa. Also, buffaloes, elephants and antelopes are commonly seen along River Kafue and around Lake Itezhi-tezhi.