With an area of 5053 square kilometers (1951 square miles), Gonarezhou National Park is Zimbabwe’s second-largest Protected Area after the popular Hwange National Park and is situated within the remote corner of south-eastern Zimbabwe in Masvingo Province, on the southern side of Chimanimani on the border of Mozambique.

Gonarezhou National Park was gazetted in 1975 by combining the former hunting zones and tsetse fly control corridors and was closed to the public during the Rhodesian war as well as the Mozambique Civil war but was re-opened in 1994 as part of the International-Great Limpopo Transfrontier Park. Three main rivers-Mwenezi, Save, and Runde drain through the National Park and form natural oases and pools that offer shelter to fish species but also attract numerous wildlife and bird species.

Due to its large size, the rugged terrain, and its location from the major tourist routes, the largest part of this National Park has remained as a tranquil wilderness Area that offers tourists the feeling of having the wilderness to themselves. This Park derived its name from a Shona word meaning elephant tucks and forms part of the massive Pan-African Limpopo Transfrontier Park, a vast Park that connects this Zimbabwean Park with Mozambique’s Limpopo National Park and South Africa’s popular Kruger National Park, making the wild animals move freely between the three Conservation Areas. 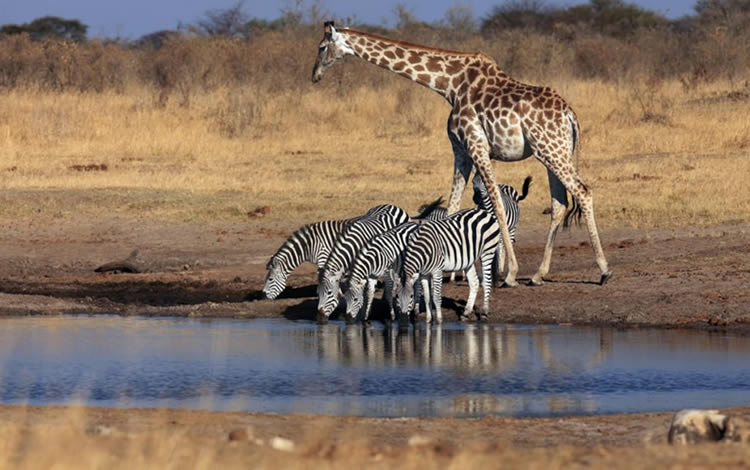 The north-eastern corner of this Zimbabwean National Park lies within the Zambezian and Mopane woodlands whereas its south-western part is mainly characterized by the southern Africa Bushveld eco-region.

One of the exceptional animals in this Park is the endangered Cape Wild dog and the cross-border connection to the National Parks in neighboring Mozambique hence offers the perfect chance to see the animals in the neighboring Parks. Nonetheless, other mammals to encounter here include Hyenas, giraffes, cheetahs, elephants, lions, Suni, Hippos, white rhinos, Nyala, wildebeests, Cape buffaloes, black rhinos, and zebras among others. Aquatic wildlife species to look out for within this Park include the turquoise killifish, the Zambezi Shark, Black Bream, and Freshwater Goby among others within the Park’s pools and rivers.

Besides the flora and fauna, other attractions to see within this Park include the Chilojo Cliffs, beautiful red sandstone cliffs formed through erosion, and overlooks the stunning Runde River Valley. Also, natural falls such as Duguvi and Chibilila as well as water pans such as Tembahata and Chindhlambai can be explored by tourists who visit this Park and are undeniably some of the best birding spots in the Park.

Some of the tourist activities not to miss within the Park include fishing, bird watching, walking safaris, game viewing, and scenic viewing at the Makonde pool, Chilojo, and Mwatomba Pool cliffs

Where to stay within Gonarezhou National Park?

With the few facilities in the Park, tourists can spend overnights within the self-catering Swimuwini Rest Camp, found on the banks of River Mwenezi and is managed by the Zimbabwean National Parks and Wildlife Authority. Other safari Lodges here include Chilo Gorge Safari Lodge and many others.