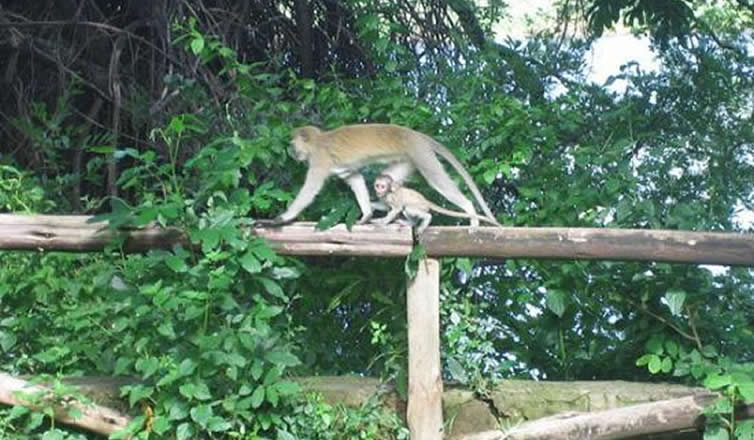 Botswana: Surrounded by funny monkeys and other animals in Chobe National Park

After spending a week in Victoria Falls, Botswana was my next destination. As I mentioned, the falls are very close to the border with Botswana and I had already read about them in books. From Livingstone wanted to take a share to reach the border taxi but there was no one out there so I finally had to take a private one, but I went for a fairly reasonable price. Within an hour I was already there. In fact, Zambia and Botswana are played only a small dot on the map, known as Kazungula, next are Namibia and Zimbabwe. At this point, you have to cross the river with a small floating platform that continuously transports vehicles forth.

Before boarding, I asked a guy who was there what to do once he had crossed and he told me to ask another guy who was with a car to take me. At first, I did not feel its a good idea to get in the car, but the guy was working for a car rental company and was returning the vehicle to the company after being left by the clients. It was nice and a great opportunity because I got a free ride, so I felt safe and we continued. I crossed on the ferry with the guy from the car and once on the other side went through the immigration offices of Botswana.

The truth is that I was lucky that this guy gave me a lift, there was no one, and would have had to wait for a while. He left me in the town of Kasane, which is just a few kilometers from the border and is the main gateway to visit Chobe National Park, one of the most famous in Botswana. The main problem with Kasane town is there is no cheap backpacker accommodation. But as I was with the tent could settle in any campground of any lodge. He planned to settle on one that had been seen in the directory but it was far from the center and the guy told me to go somewhere that was next to the supermarket and so could save on meals, it was good advice. 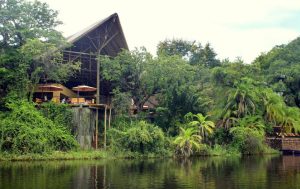 I stayed at Chobe Safari Lodge, very large and quite luxurious, very different from other places I usually stay. But Botswana is a very popular country for luxury and organized safaris and is not intended for independent travelers. Luckily this lodge has a camping area and there planted my tent. It is also very popular among travelers for adventurous rides on 4×4 through southern Africa, so the camping areas are full of jeeps with rooftop tents. The issue is that people travel in these jeeps carrying things to cook and then be saved. But if you can not cook, as I do, or eat in the hotel restaurant which is quite expensive, or strips of food from the supermarket, the options are very limited. The lodge was fine but it was not at all my style, not lower mean age of 60 and most were with organized trips, such that they have absolutely everything programmed. I fully understand that there are people who prefer to travel this way, but I do not feel identified.

What I loved about the site is that it was surrounded by animals. His shop is a few meters from the river with beautiful views. Around the camping area, there were several signs indicating that it could find hippos and crocodiles. In addition, throughout the grounds of the lodge, there were many monkeys, wild boars, and some gazelle. I realized that in Botswana, you are really close to the animals, in fact, on the way to the lodge I had seen some elephants in the distance.

After planting the tent, I had a good time watching and photographing the monkeys around him. There were so many monkeys playing around and jumping through the trees, running and playing with each other. It’s amazing how much they resemble humans. These are already very used to seeing people so let’s get close enough to them. 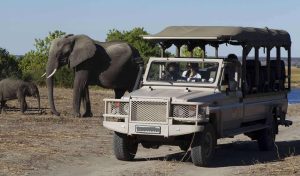 It’s also very funny to see mothers with babies. When are newborns do not leave them alone for a moment and if they walk they carry and hang them on the belly. There was a female with a dead baby who had not realized he was dead and it was awesome because it was carried from one place to another and caressed as if it were alive. I wondered at what point it stopped! Males have a super eggs gaudy blue, something rather curious. Then I went to the central area of the lodge, where the restaurant and pool with several tables around. Also, monkeys scamper around in search of food. The Liab enough and broke more than a glass jumping between tables. We must be careful because as dawdle a moment you run out of food. At night we heard the sounds of hippos so strong that it seemed were next door but actually were in the river. In the morning when I got up there was a group of more than fifty baboons, another monkey a little bigger, jumping and playing around. It was great to sleep surrounded by many animals. It’s such a lifetime adventure experience in Africa.

The next day, I went to visit Chobe National Park organized by the lodge where I slept and joined a route three-hour drive through the park. We left at 6 am because it makes less heat and is the best time to see the animals. We were 6 people in a group. We were in an open three rows of three seats each jeep. It is curious why in every country I made safaris have a different standard vehicle. In Kenya are minivans and jeeps in Tanzania with the roof closed rising, and Botswana open jeeps. In Uganda, they use 4×4 Land cruiser Prado or hard top and all with an enclosed roof but with a pop-up for excellent game viewing and photographing. Everyone was in the same type of car. Within minutes of leaving the lodge and before passing the park gate we came across a family of elephants on the road. Once inside we were circulating paths with very soft sand, sometimes we were gliding. We were quite a while circulating in parallel to the Chobe River, which crosses the park and attracts all the animals that come to drink. We saw a couple of lions resting in the distance, several groups of buffalo, antelope, and some giraffes. The scenery was very nice. 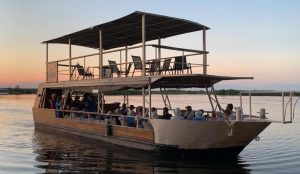 That afternoon I did a safari boat cruise on the Chobe River, also organized by the lodge. It was a huge boat with about 50 people, too many for my taste. We were about three hours on the river slowly. We saw huge crocodiles, buffalo, and hippos. But the best was the elephants. There was a huge group on the riverbank and we could see them for a long time at close range. It was late afternoon and the light was beautiful.

The next day happens me the lodge, sunbathing and bathing in the pool. It was really hot, about 40 degrees, it was quite stifling. The town of Kasane has almost nothing, in fact, I think it can not be considered a city. There is a gas station, a supermarket, and a restaurant, but nothing interesting to see. The next day as I went to northwestern Botswana to see the beautiful Okavango Delta, as I tell you in the next post.