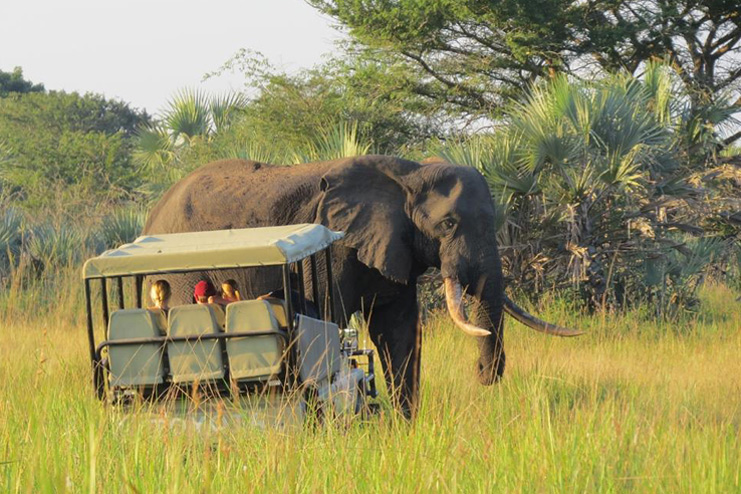 Established in 1983, Tembe Elephant National Park is one of South Africa’s most spectacular national parks. This 3012 ha (300 square kilometers) game reserve in Maputaland, KwaZulu Natal South Africa was established to offer refuge to elephants that used to migrate between Maputaland and southern Mozambique. It lies next to Ndumo game reserve and it was developed by Tembe Trial Authority and Ezemvelo KZN wildlife.

These elephants were traumatized by illegal hunting especially during the civil war in Mozambique they opted to spend much of their time within the thick sand forest areas which today have become part of the Tembe Elephant National Park. Today, this park offers refuge to over 250 elephants that also feature among the largest in the world. Besides, it also offers refuge to the Cape Buffaloes, Leopards, Rhinos as well as several impalas, Kudus, red duikers, wildebeest, jackals, hyenas, serval, elands, zebras, giraffes, hippos, waterbucks, warthogs, Nyala, Lions and many other wildlife species.

Over 340 avian species are found at this park and most of them include the unique Rudd’s apalis, natal nightjars, Rufous belied heron and Woodward’s batis and others. Tembe’s mosaic of sand forest, woodland, grassland and swampland features as the best area for one to spot out most of the elephants.

For visitors who are interested in game viewing, this park is regarded as an all year around destination but peak viewing over the winter months start from May to October. However, there are several usual suspects that can come along your way in the course of the day especially the early sun risers or catch up with the sunset rush prior waiting for the night time sightings. Most elephants confine around this park to drink water especially around March to October and you can spot out variety of elephants in broad day light.

Getting to Tembe Elephant National Park

Tembe Elephant National Park can be reached by road and air. By road, this park is a 4 hours’ drive on the tarred road from Durban. Visitors can meet at the park entrance gate and be directed to the safe parking place where you then be driven to your respective lodge. And those visitors who wish to have transport from Durban, you can find one at the hotel or you will be picked up and be driven to Tembe Park in a luxury air conditioned car. By air, there is a return air service from Virginia Airport, north of Durban, direct to the airstrip at Tembe or the nearby Manguzi airstrip but this will depend on the weather conditions.

Lastly, Tembe Elephant Park is one of the perfect destinations you should consider a must to visit to view most of elephants and several mammal, bird species and many others.